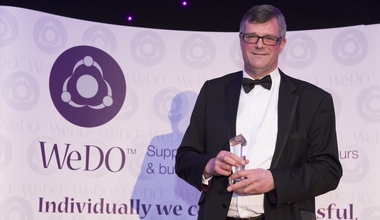 Recruitment and investment entrepreneur Paul Atkinson has been awarded ‘Scotland’s Most Inspiring Leader’ Awards at the WeDO Scotland Awards, held over the weekend in Edinburgh’s Sheraton Hotel.

In October 2017, Paul launched Taranata Group, along with a vision to build a £100m supergroup by 2020.  The group currently comprises four established recruitment brands operating in the UK and internationally, and is currently on the acquisition trail.

As well as giving sincere thanks to WeDO Scotland, the individuals and the teams he has worked with along the way, Paul Atkinson also commented: “I’ve been very fortunate on both sides of my business, with Par Equity and all the inventive businesses we are involved with; and more recently with the creation of Taranata Group, which we are working to build into an international talent supergroup.  Above all, working in Scotland, with its tradition of innovation, curiosity, grit and pioneering spirit, continues to be an inspiration and a privilege."

Belinda Roberts, founder of WeDO Scotland said: “We are thrilled that Paul Atkinson won our inaugural Inspiring Leader Award.  Paul has been an inspiration to the Scottish entrepreneurial community over many years both with the businesses he has created and those he has invested in and helped.  He is always willing to give of his time, even to those he doesn’t know, and his vision, passion and genuine interest and support of others is exemplary.”

WeDO Scotland is the country’s most exclusive leadership organisation for transformational business owners and leaders of dynamic companies. Membership is predominantly by invitation or referral and is subject to approval by an executive team.

Issued on behalf of Taranata Group by Clark Communications.  For further information, please contact Lesley Brydon on 0131 225 9596/07771 630834 or lesley@clarkcommunications.co.uk.

Taranata Group currently comprises Head Resourcing, Change Recruitment, Head Medical and Atkinson Macleod; employs almost 150 people and turns over around £65m.  Each individual business is a specialist, and operates with autonomy both at home and internationally.